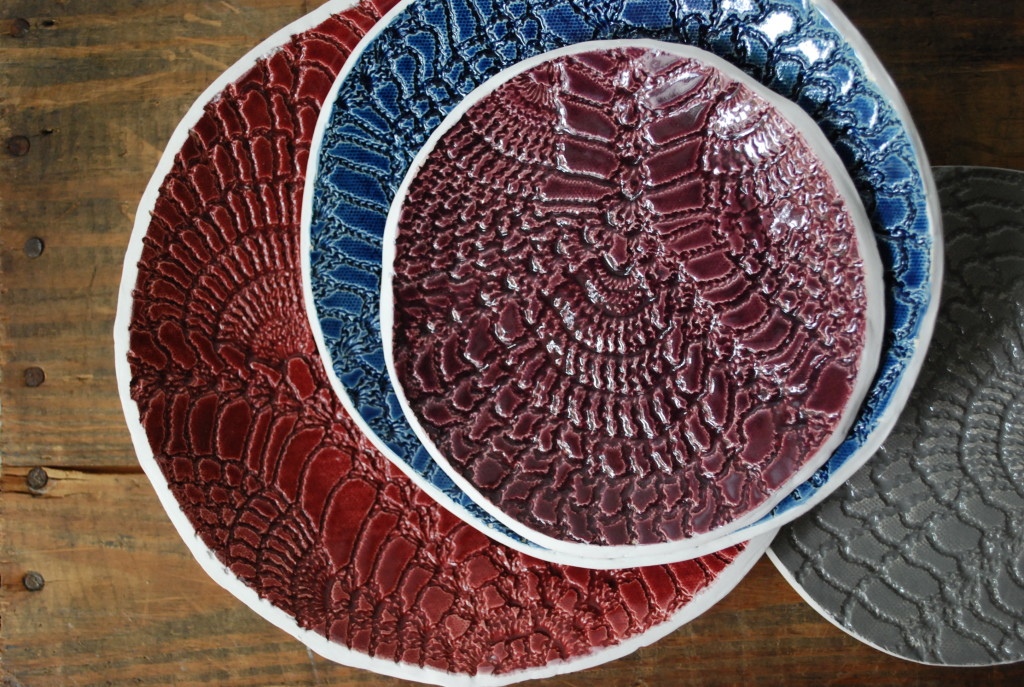 Last Fall, I took an Intro to Ceramics class at the Fleisher Art Memorial. It’s a non-profit art school offering painting, drawing, ceramics, printmaking, and several other courses to children and adults, and it’s one of the only institutions offering tuition-free art classes in the country. I’m super lucky that it’s right around the corner from where I live! Throughout my 10-week class, I learned about the variations of clay that potters typically use, the process for throwing on a wheel, the range of glazes, and the kiln firing processes, among many other tips and tricks.

In the spring I enrolled in a ceramics open studio, which allows access to clay studio equipment and kilns for basically as many hours in the week as you’re able to attend. Hand-building ceramic pieces using the slab roller and moulds ended up working out a lot better for me than throwing pieces on the wheel — there’s a very steep learning curve for the wheel, and I didn’t spend enough time practicing.

I really enjoyed making dishes and bowls with imprints of patterns and lettering. The dishes in the image above were pressed with crocheted lace, which I found in a random supplies box in the studio. It was a pretty simple process in the end! Here’s the run down of how I did it:

Starting with a bag of white clay (it’s grey when wet but dries white), I shaved off a baseball-sized chunk with the wire tool. The wire cuts through the clay like butter, literally. 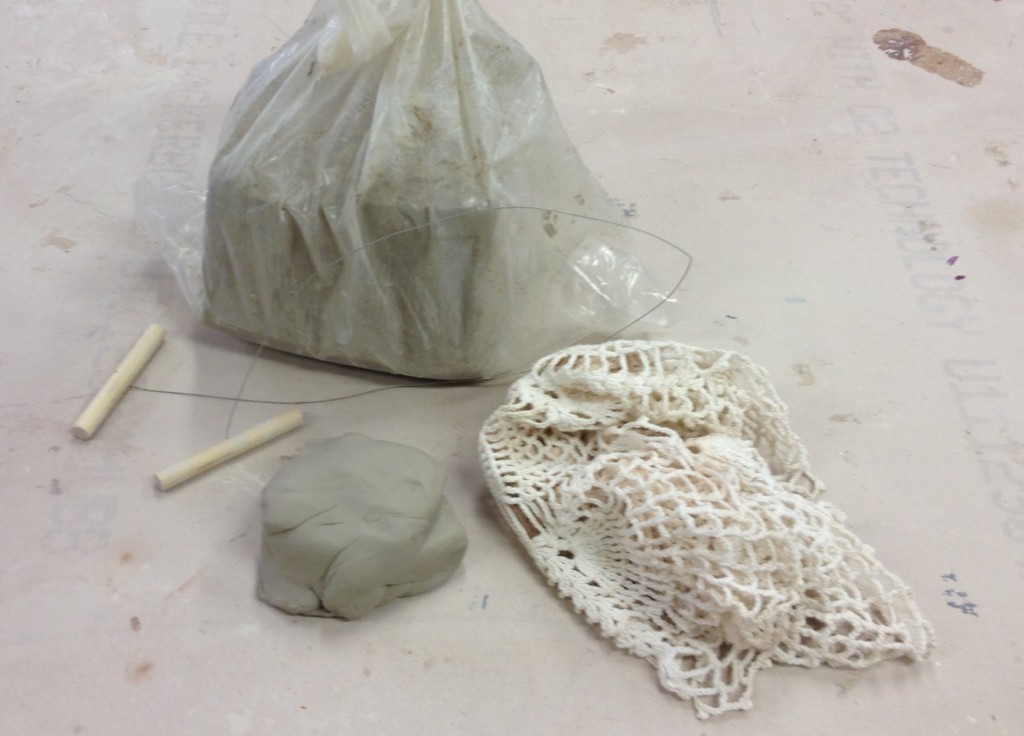 After softening the clay by squeezing it around a bit, I placed it on the slab roller between two pieces of white canvas. The slab roller has a gauge that can be adjusted depending on how thick you want the slab of clay to come through it. If the gauge is too low on the first roll, the clay won’t go through, so it’s generally a good rule of thumb to start with a high thickness and continue to roll the clay through multiple times, decreasing the gauge slightly each time. I decided that I wanted my dishes to be on the thicker side for more sturdiness, so the thickness I set for my final roll was about 1/3 of an inch. Before the final pass through, I placed the lace on top of the clay, under the top layer of canvas. 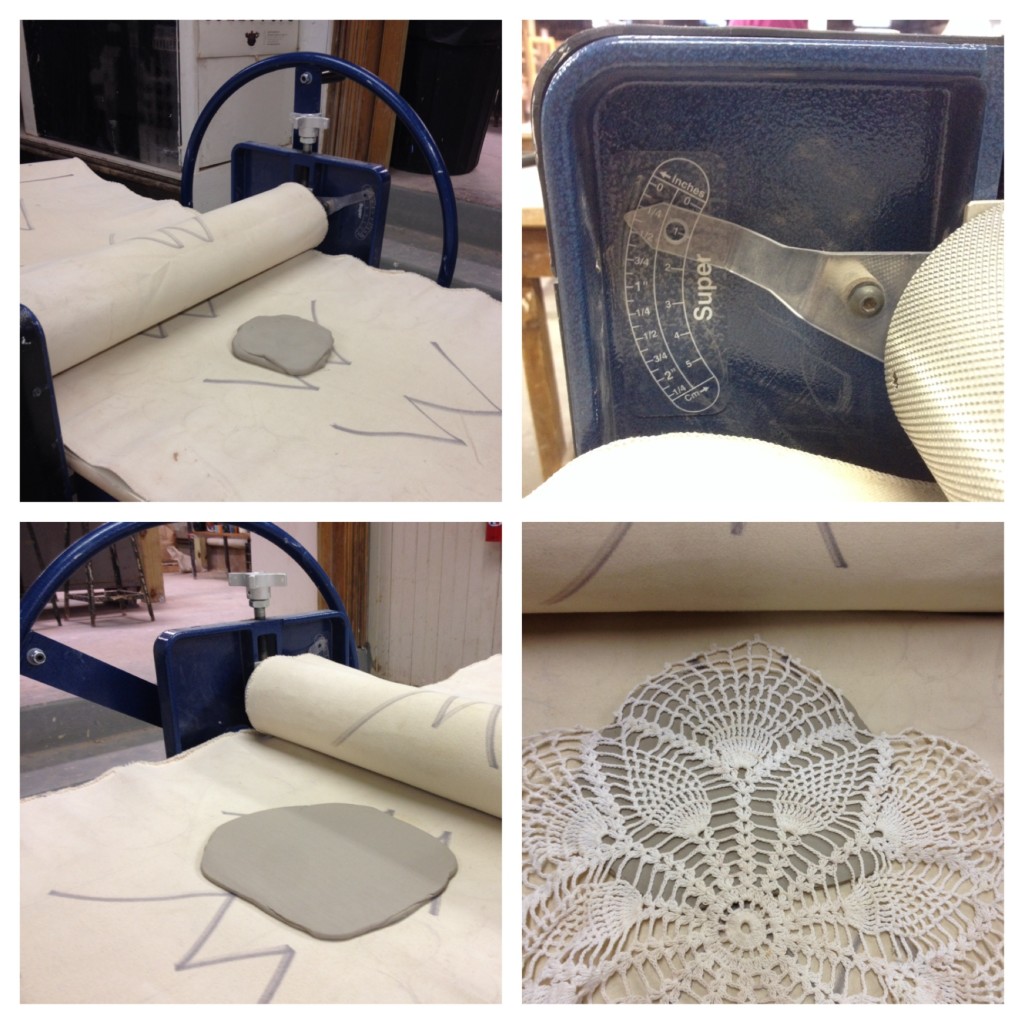 When the clay came through the other side of the roller, I peeled off the lace and placed the slab of clay pattern-side down over a round plaster mould. The plaster is so dry that the clay doesn’t stick to it, and it actually pulls a good amount of moisture out of the clay so that the piece dries quickly. After about 10 minutes of time on the mould, I used the knife tool to cut a circular shape and smooth out the edge.

In the Fleisher studio there’s a drying cabinet, which is basically just a closed space with a fan for quick drying — I’d usually leave my moulds in there for an additional 10-30 minutes, to make sure that the dishes held their shape when I took them off the mould. Then, to the kiln! Because it’s a thing that’s approximately 2000 degrees hot, students and open studio artists don’t work with the kiln, but rather leave projects on a shelf to pick up after they’ve been fired by a Fleisher employee. 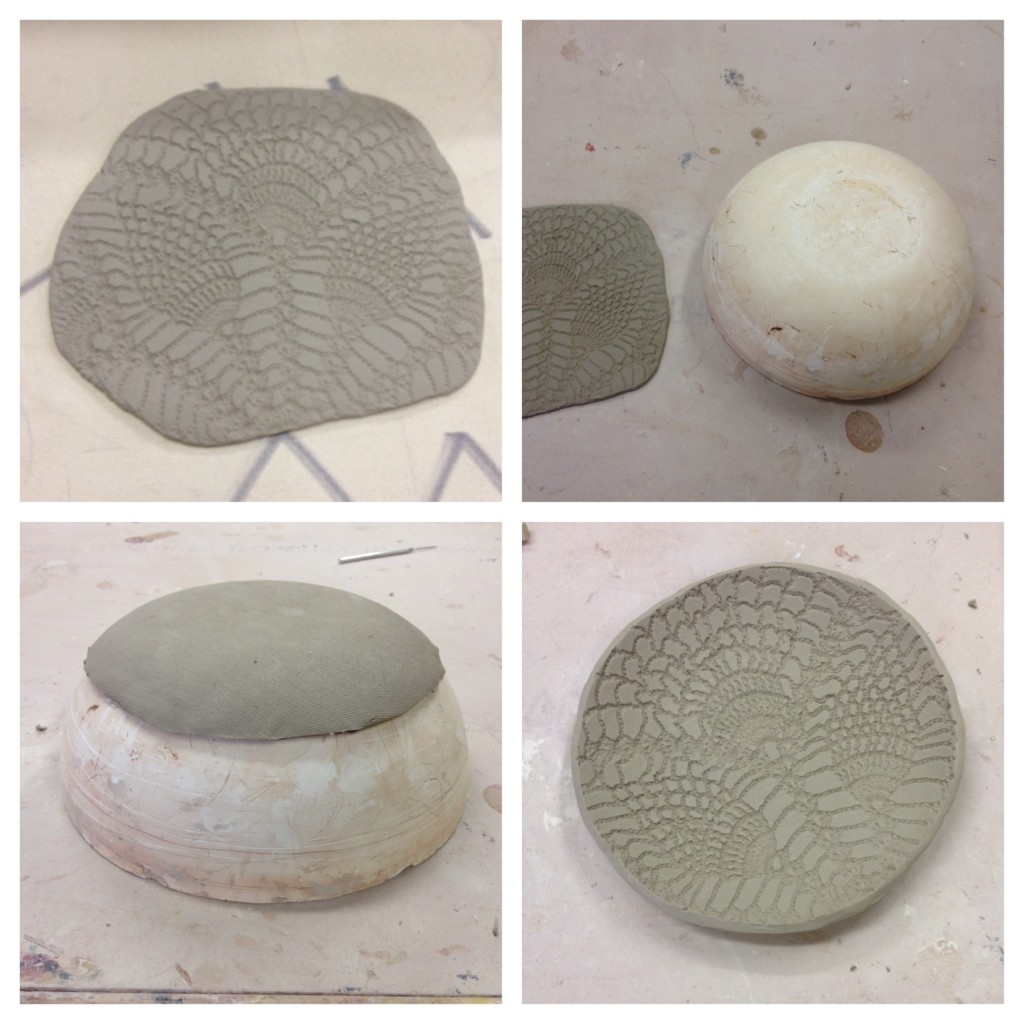 After coming out of the kiln, the bisque pieces are bone white, and are sometimes a little rough on the surface. I always sanded my pieces down with coarse sandpaper, and then wiped them off with a damp paper towel so that the glazing surface wasn’t dusty or rough. For the tops of the lace imprinted bowls, I used about three coats of solid colored gloss glazes, leaving about 5 minutes in between coats for drying.

It’s sort of hard to know what exact color you’ll end up with, as the color of the gloss is often nothing like the finished color (clear gloss is actually blue-colored, and green gloss is actually copper-colored), and the glazes drastically lighten in shade as they’re drying. But underglazes, which are matte glazes I used for the bottoms of the lace imprinted dishes, are much easier to predict since their colors are true. Using underglazes at the bottoms of pieces is a common practice, because gloss glaze would melt and adhere to the bottom of the kiln, causing a huge mess. 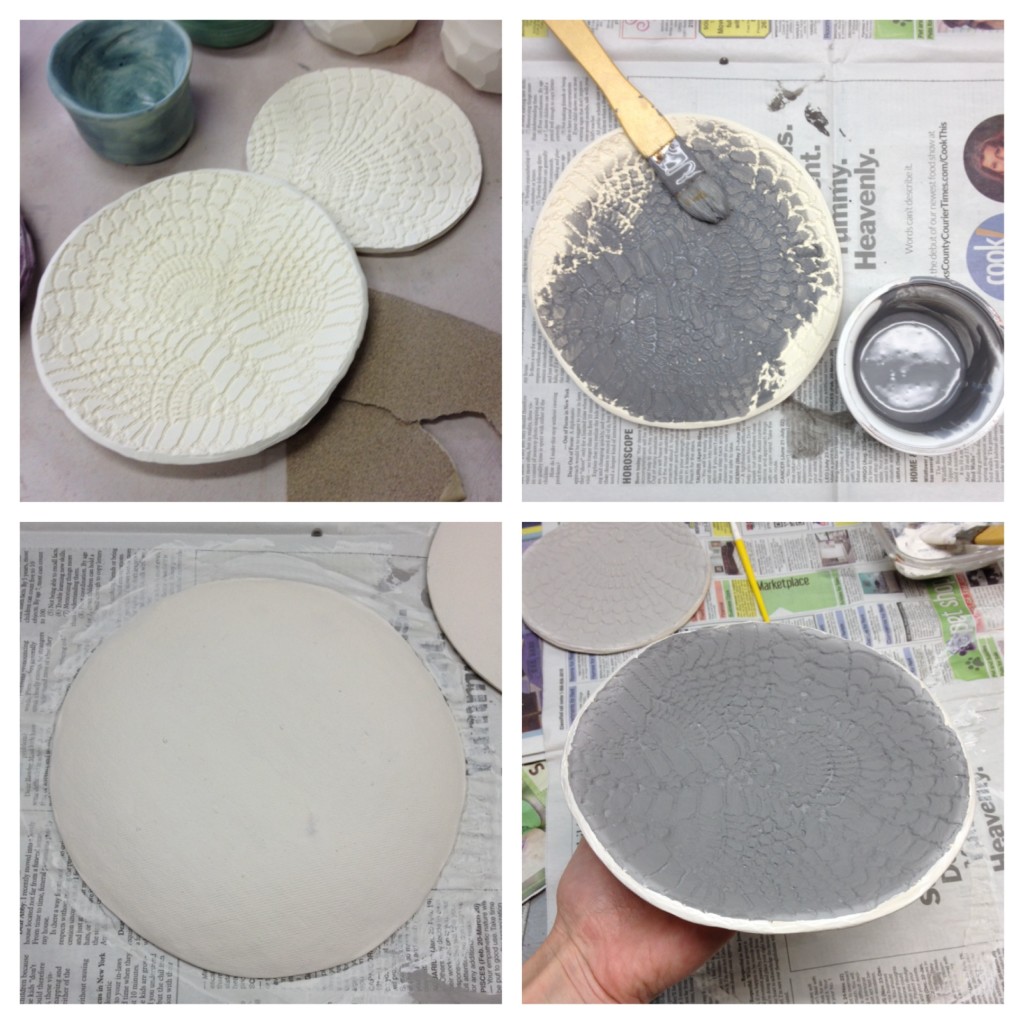 Then… the most exciting part… getting the pieces back from the final kiln firing! 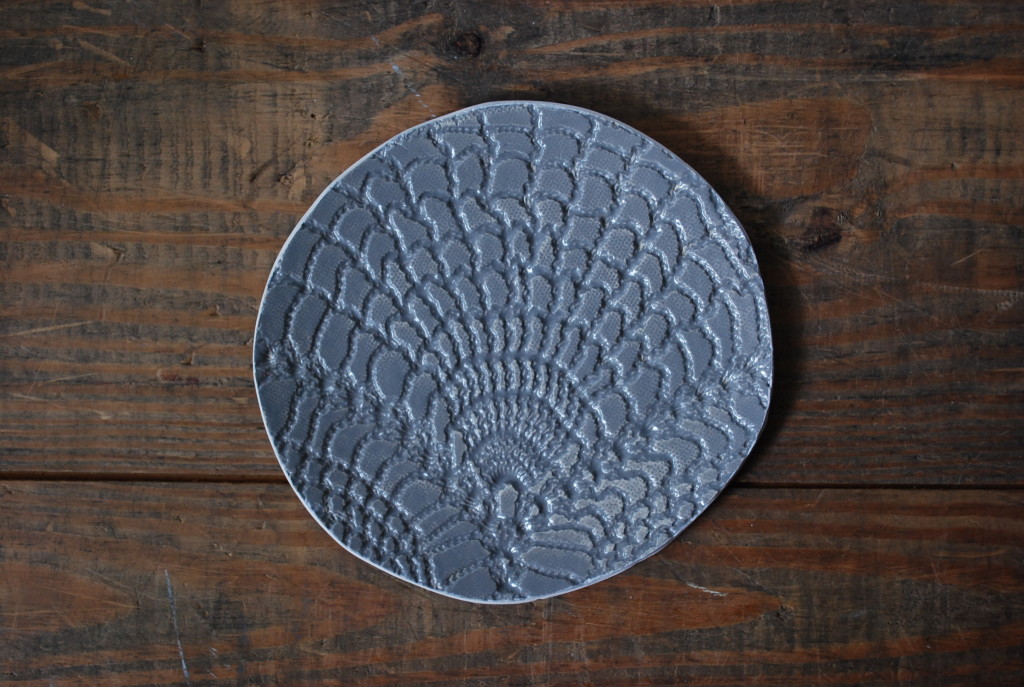 That guy above is one of the pieces I recently listed in my Etsy shop. There are a few lace imprinted dishes like that one, as well as a few letter and flower imprinted pieces. I feel like I only scratched the surface with these imprints and patterns — there are so many interesting textile surfaces and other stamp-like surfaces that I’m excited to experiment with in the future…

If you’re interested in taking an art course at the Fleisher, registration for tuition-free classes opens on Monday (7/28) at 8am. Make sure you’re at your computer at 8am, because by 8:05am, the classes will be full!